Whether you are an adult or a child, trampolines can be a very exciting way to play.

All kids seem to enjoy bouncing high up into the air where it feels like perhaps they are flying. They also enjoy the feel of free falling when gravity takes over and brings them back to the jumping mat. However, because children are children, they will also come up with other ways to make it even more fun.

Parents can encourage other activities on a trampoline and take part in these fun trampoline games. It is a great way to encourage kids to exercise longer and stay more active as a family.

Is It Safe to Play Trampoline Games?

With so many games to play on the trampoline, you will not ever find a better way to encourage kids to get back to playing. The one thing that concerns most parts is whether these games are going to be safe or not. The key here is to consider trampoline safety. Keep in mind that trampolines can be dangerous if children are not given limits. 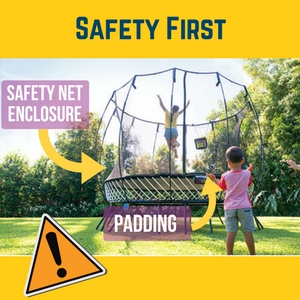 When playing with the sprinkler or having kids aim water guns at their target, trampolines get slick when wet. Therefore, these games should only be played if you have a safety net enclosure and padding where the springs are.

If you want to play a trampoline game that includes having a group of kids doing something, Simon Says, Monkey in the Middle, or others, make sure that your trampoline is rated to hold the kids that are on it. You should also not allow too many kids on it at one time. If you have really small children on it with bigger kids someone could get hurt.

When it comes to safety, you are the best judge around. If you are worried then you should stand watch to ensure that things do not get out of hand. With thought and proper considerations, you can prevent injuries while allowing all the kids you know to have a fantastic time. 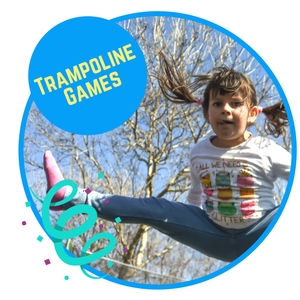 Kids have wonderful imaginations when it comes to games, both on and off the trampoline. With encouragement from you, it can lead to some of the most creative games.

One game that a lot of children play is Popcorn. This is where you have one person sit in the middle as a popcorn kernel. They should curl up as small as possible crossing their legs and hugging their knees. Other players around them should then start bouncing. The game ends when the popcorn kernel changes position to steady themselves. The more players you have for this game, the more fun it will be, but it can be played with only two or three players. The winner is the one that makes them topple.

For a fun variation of this game, choose a well stuffed pillow that the person in the middle can sit on, kind of like a bull rider, and have others bounce around to make the “rider” fall off of his “bull”.

Marco Polo is a game that is usually considered a water game, but the trampoline can be used as well. Simply have one person close their eyes in the middle of the trampoline and count to ten. Others on the mat will move around as quietly as possible. Then Marco will crawl around trying to find them shouting “Marco” while the others reply, “polo”. If you are wanting to play on a hot summer’s day or you want the water aspect of it, you can add sprinklers or misters to the trampoline.

Kids can play Simon Says on a trampoline. One person can stand on the ground, say “Simon says spin” and then let the giggles begin for the kids. It makes this traditional game much more exciting when you add in a little bouncing action with every command. If you want to add a spin to the Simon Says game, you can have all players line up outside of the trampoline and then have one person get on and perform a single bounce trick. They come off the trampoline and the next person gets on doing the previous person’s trick and adding another. As each player as their turn, the number of bounce tricks being done will grow longer and lasts until someone messes up the sequence. You can also add in some music and have the kids perform a dance move that others try to mimic.

Crossfire is a game similar to dodge ball except you have two or three kids on the trampoline and everyone else on the ground. The people on the ground have a softball and they try to tag someone who is on the trampoline. When someone is tagged they get down and the one who threw the ball climbs up. In this trampoline game, points are made by seeing who can reach the most tags first.

Kids can play dodgeball where one child avoids getting hit while in the center of the mat jumping around. All other kids will be standing on the ground around the mat. When someone hits the child that is bouncing with a softball, that person then gets on the trampoline. If everyone wants to stay on the mat, you can change it up by putting the ball in the center and having everyone start jumping around while trying to avoid contact with the ball. If the ball touches someone, that person is out of the game. This game requires no safety net so make sure the kids are old enough to reduce the chance of injury.

In the summer time, many kids will avoid the trampoline because it gets hot. You can remedy this situation by adding water to the fun. You can do this by encouraging them to play water balloon dodgeball and a variety of other games. Dodgeball with water balloons is played the same way as regular dodgeball, but enables kids to keep cool.

Hot potato involves everyone bouncing at one time around the perimeter of the mat. Kids have to bounce around in a circle, catching the ball and then tossing it to someone else every few seconds. If someone drops the potato, they are out of the game and the winner is the one who is left standing alone with no one to toss it to.

If you have a beach ball your kids may enjoy the challenge of a beach ball toss with a twist. To play, have kids lay down on the trampoline and toss the ball up into the air. As it falls back down to the trampoline, kids will want to hit it so that it goes back up. This ensures that the ball never hits the mat.

Using a rope to create a “snake” is a fun way for smaller kids to play a game. It can also build imagination since the point of the game is to avoid the snake. Simply lay a rope across the trampoline mat and then wiggle it quickly from side to side. Kids can jump over it or away from it to avoid being touched by it.

During the cooler months kids can use chalk on the mat to create fun games to play. Twister is a favorite indoor board game that can be taken to the mat if you have a spinner and various colors of chalk. Each child can draw circles on the mat and then a player on the ground will spin the spinner.

Hopscotch can also be played on the trampoline and it is even more exciting when they have a little extra bounce in it. If your kids do not want to draw a traditional hopscotch board, they can customize the board. It is recommended that instead of using a rock, kids should use a bean bag type sack or ball. 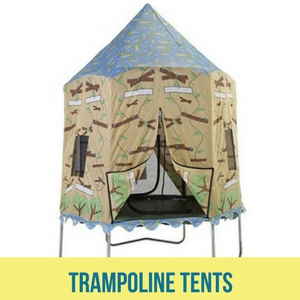 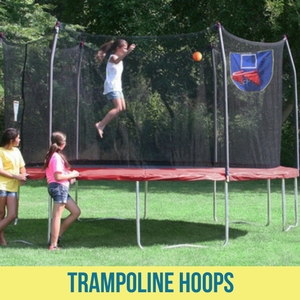 Some of the most popular trampoline toys available include trampoline bounce boards, hoppy balls, soft bouncy balls, cords which can run across the mat, sidewalk chalk, and ball toss nets. There are several different styles of toss nets available like soft balls or bean bags. 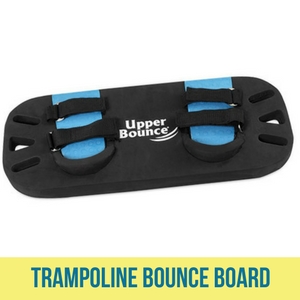 For parents who need to consider their finances, most are easily affordable options. However, if you want a few DIY ideas for games to play on a trampoline, you have options there as well.

If your trampoline has a safety net, you can put a sprinkler under it to cool off the heated mat as well as delight the kids and show them a new way to cool off. You can go camping on the trampoline using a trampoline tent or just a few sleeping bags depending on how bad bugs are in your area. You can use virtually any soft bouncy ball for ball games. All that matters is getting your kids up and outdoors where they can spend time laughing and playing.

Most all trampoline games can be customized to work well with kids of all ages. Parents should create rules for them based on the age group of the kids on the trampoline. For games like “Simon Says”, you may want to hold off on having small kids do tricks in sequence and for watery games; a safety net is recommended. You should also supervise the games that your kids are playing to ensure that no one does anything that is “too rough” or may cause injury.